Discover the ‘hidden gardeners’ of Pinetum 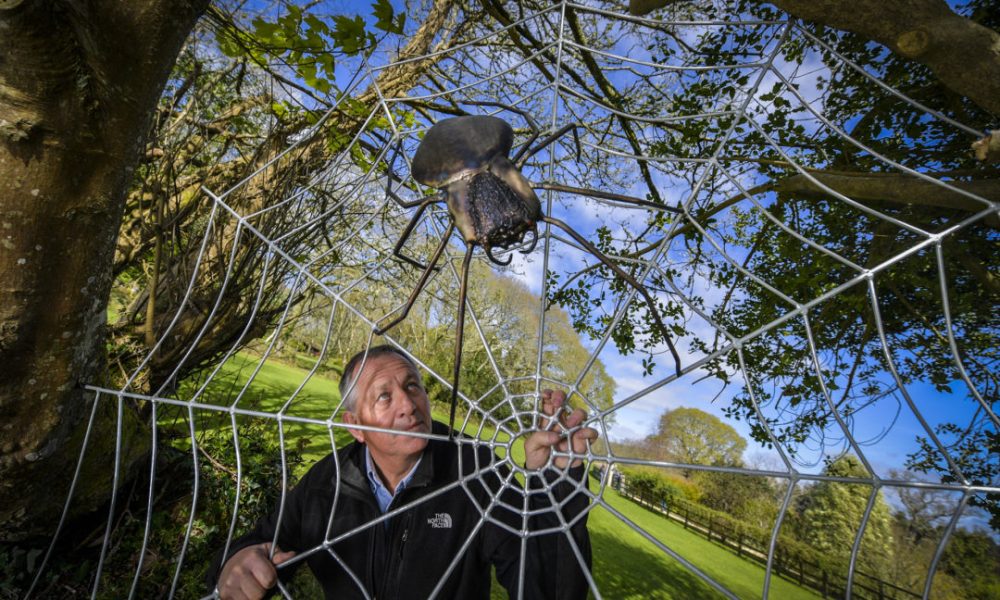 Have you met our  ‘Hidden Gardeners’ & the sculptor behind them? 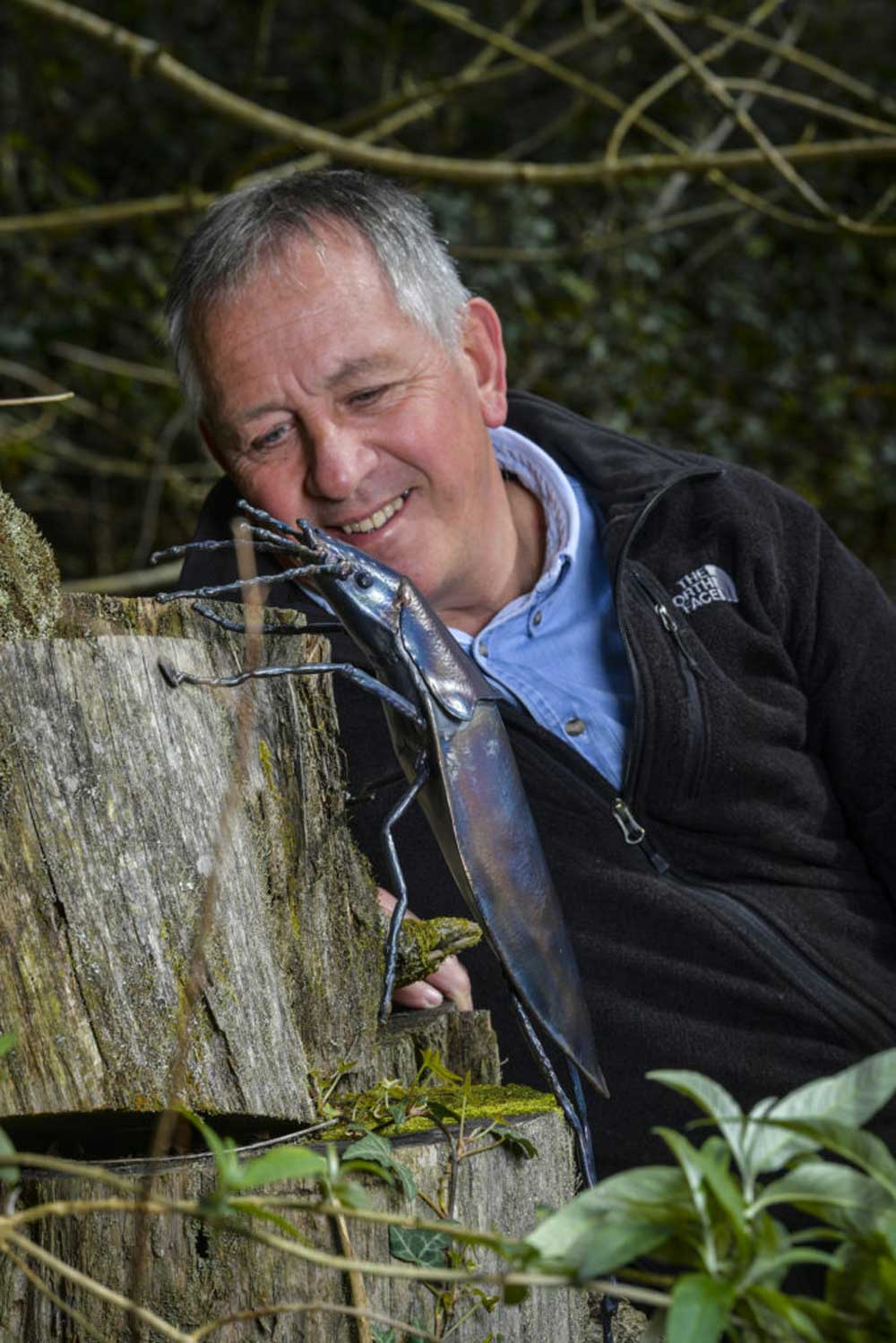 Here his wife Lyn tells us about her husband Nigel Wills, a Cornishman who, over the last 7 years, has begun to fulfil his lifelong dream – creating exquisite sculptures of fish, shells, birds and insects.

When approached by an old friend, Mike Thomas, to create a child friendly interactive sculpture trail at Pinetum Gardens, themed around resident insects, to say that Nigel was pulled out of his comfort zone, would be an understatement!

The aim, was to visualise these ‘Hidden Gardeners’ in steel, which would patina and age, merging into their surroundings, making these tiny creatures even more elusive, secretive and harder to find.

To counter them disappearing completely into the background, they were to be ten times their normal size.

Characteristically, Nigel rose to the challenge, choosing to start this unusual series of sculptures with the Common Ground Beetle. 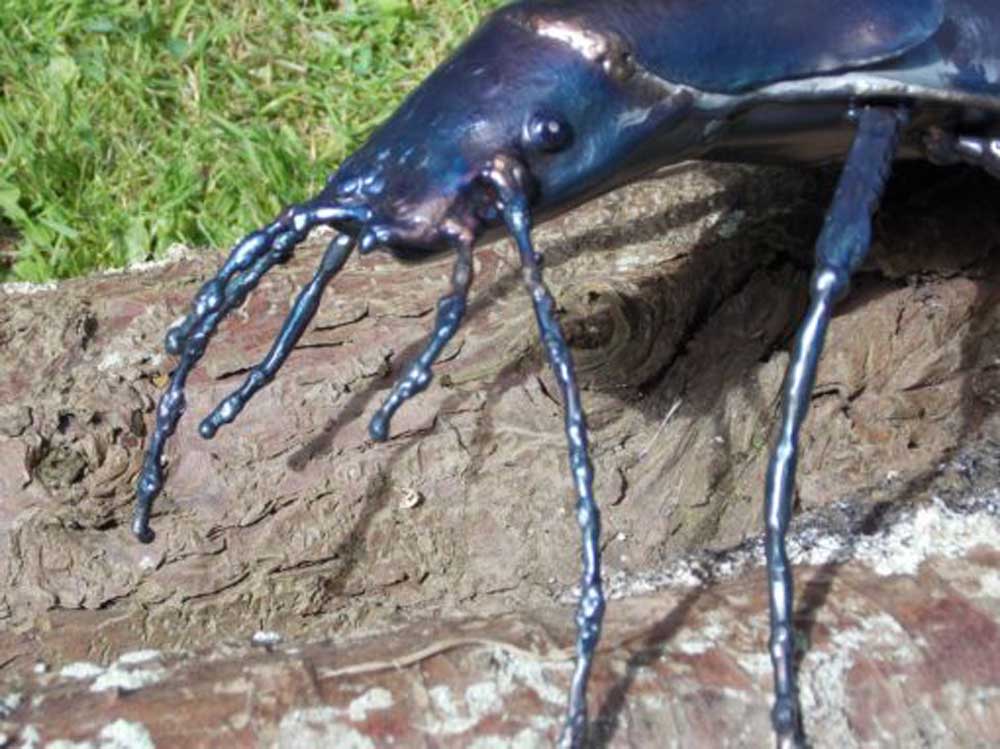 Starting by sketching and researching the scale of such a tiny subject, Nigel began by making individual body templates of the beetle’s body and legs. The ground beetle’s wings were fused together to create a unique set of armour to protect them. Did you know? This species of beetle communicates with others by scraping mouth parts together to create noise or they drum their legs on dead wood. 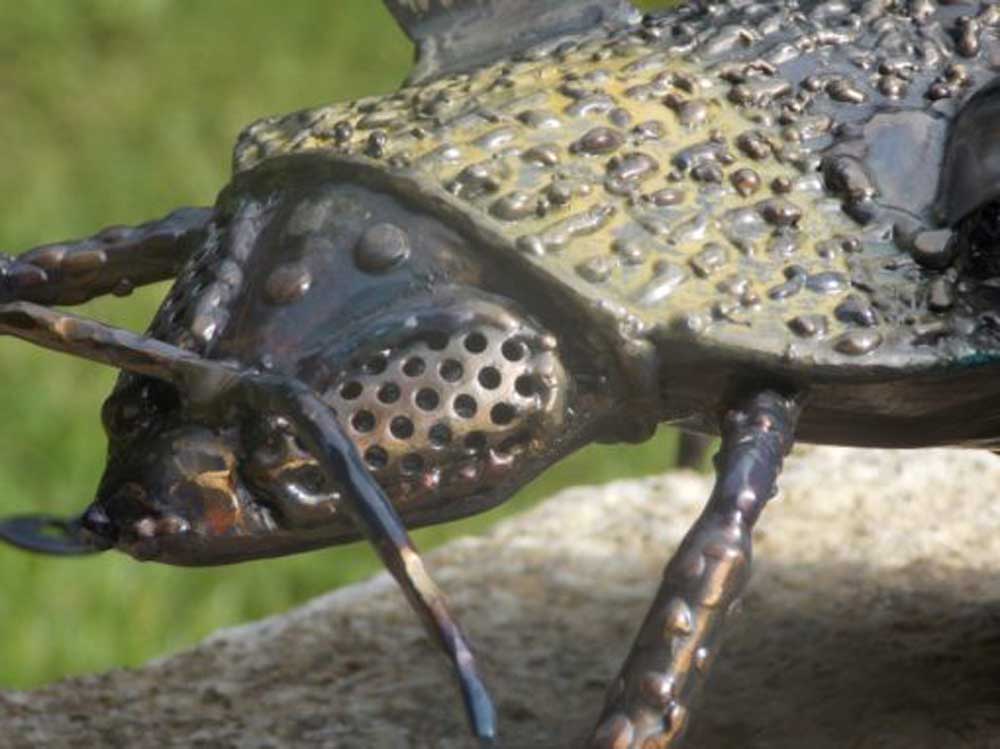 I unearthed an interesting fact while I was researching this tiny master of the garden.They leave oily footprints on the flowers that they visit and have quite smelly feet! In construction, the three main elements to the body of this sculpture, head, thorax and abdomen were all shaped separately. The wings are solid sheet steel and the facial features have eyes formed from a metal mesh to highlight the bee’s amazing sculptural eyes. The body and legs are covered in small welds to imitate the texture of the hair found there and the bee’s wings are veined using welds to imitate this. 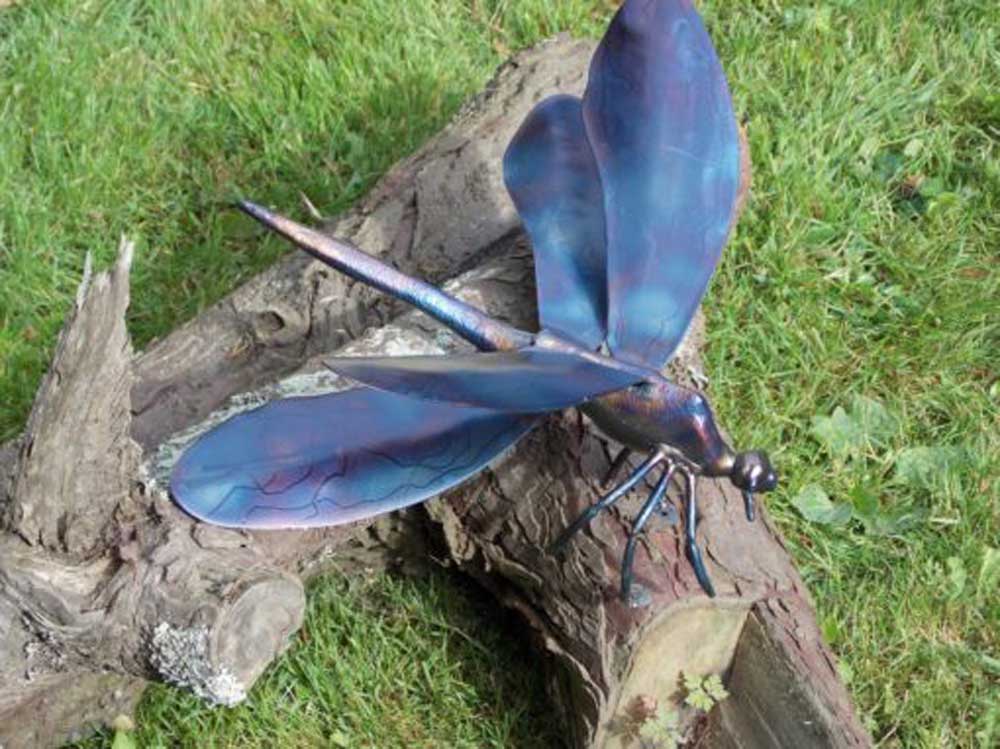 The challenge with this sculpture was principally to try and replicate the beautiful purple and blue hues in the wings of these most enchanting of insects. These hues are achieved from the welding torch; the sheet steel Nigel used reacts to heat by blooming into a range of colours varying from dark gold to rich dark purple. The skill is to control the colours as they form, once overheated there’s no going back. You will find this sculpture at the edge of the lake near the bottom of the garden where these reclusive insects make their homes. 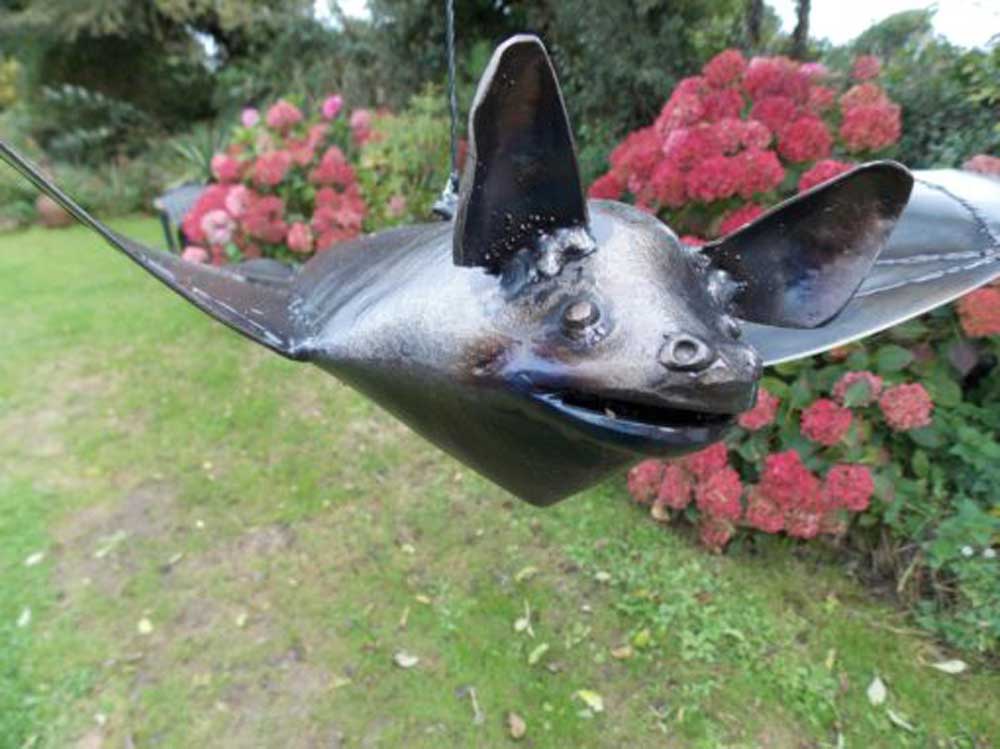 A particularly elusive resident of the gardens, a colony of this rare and tiny bat use the lake as part of their feeding grounds. Catching insects on the wing just centimetres from the surface of the water, these skilful flyers use echolocation to identify friends and food alike. A nocturnal resident, it is only a privileged few visitors who have seen these shy creatures but they certainly have a big effect on the ecosystem, eating up to 600 bugs an hour, they are voracious feeders and keep the insect pests at bay in order for the gardens to flourish. 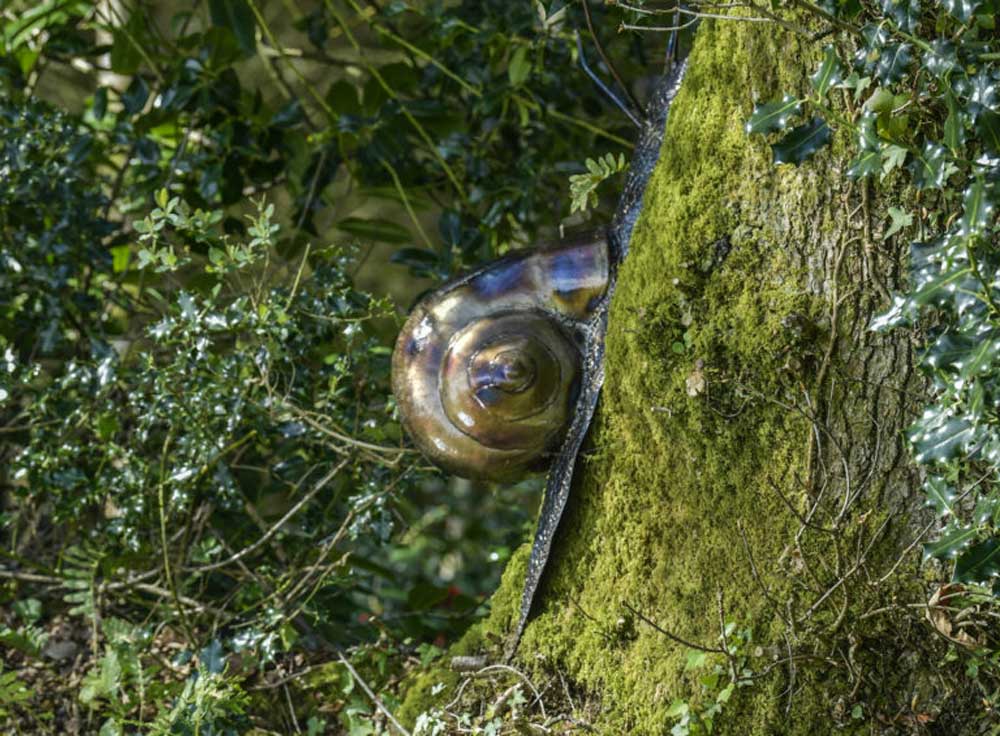 This slimy customer was the most challenging to make, its body although streamlined is mainly featureless. Nigel used a slow build-up of welds, ground off, then welded again to create its leathery body, however the shell was a different story, Made from flat steel it is created in six sections which were formed and shaped to fit each other perfectly. The rich colourful hues on the shell are reflected again in the body of this huge mollusc which measures almost a metre long. 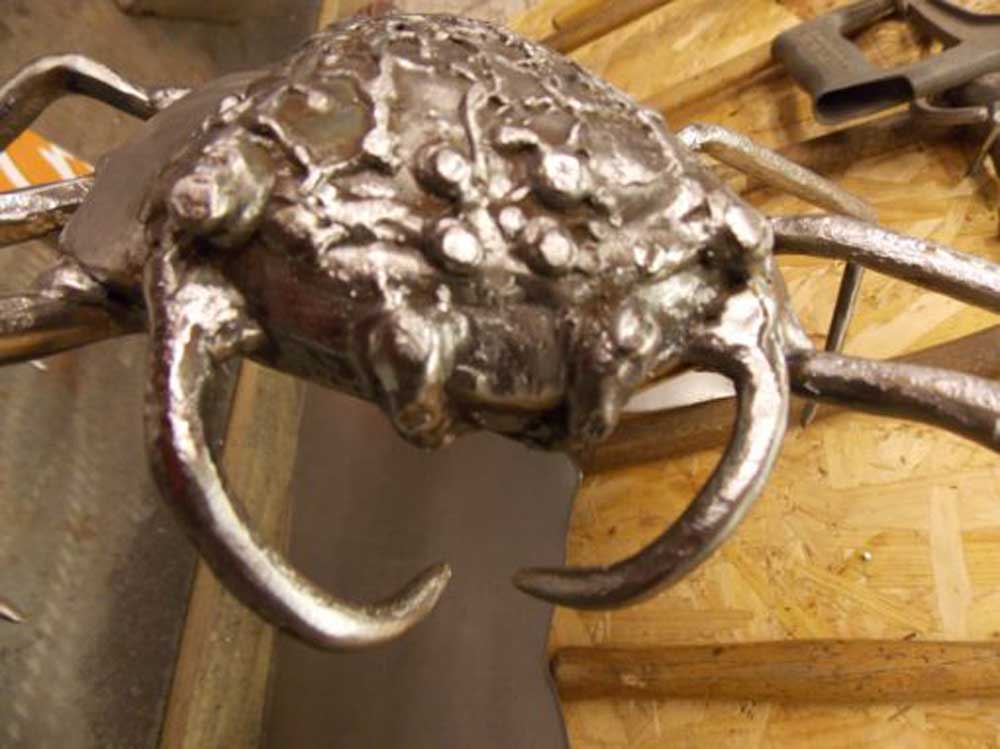 The scale of this piece is striking. Half a metre wide and hanging in a web some two metres around, poised to attack an unsuspecting victim, this huge sculpture needed to be very carefully sited. Nigel walked the gardens several times before choosing a large gap in the hedge between the Winter Garden and the Pinetum. Carefully he measured and constructed the web so that it fit this space perfectly. The web was transported to the gardens from his workshop several times, before going off to be galvanised. This process not only protects the web but leaves a silver grey hue on the metal, which catches the light, just like a real web.  ‘Incy Wincy’ is welded into the web with her lunch, a juicy fly, not far away. This piece has proved a magnet especially for the younger children who visit the gardens. Far from being frightened of the massive arachnid, they want to get up close and personal with her. So much so, that the gardens have had to protect her with a ‘No climbing into the web sign!!’

‘March of the Leaf Cutter Ants’ 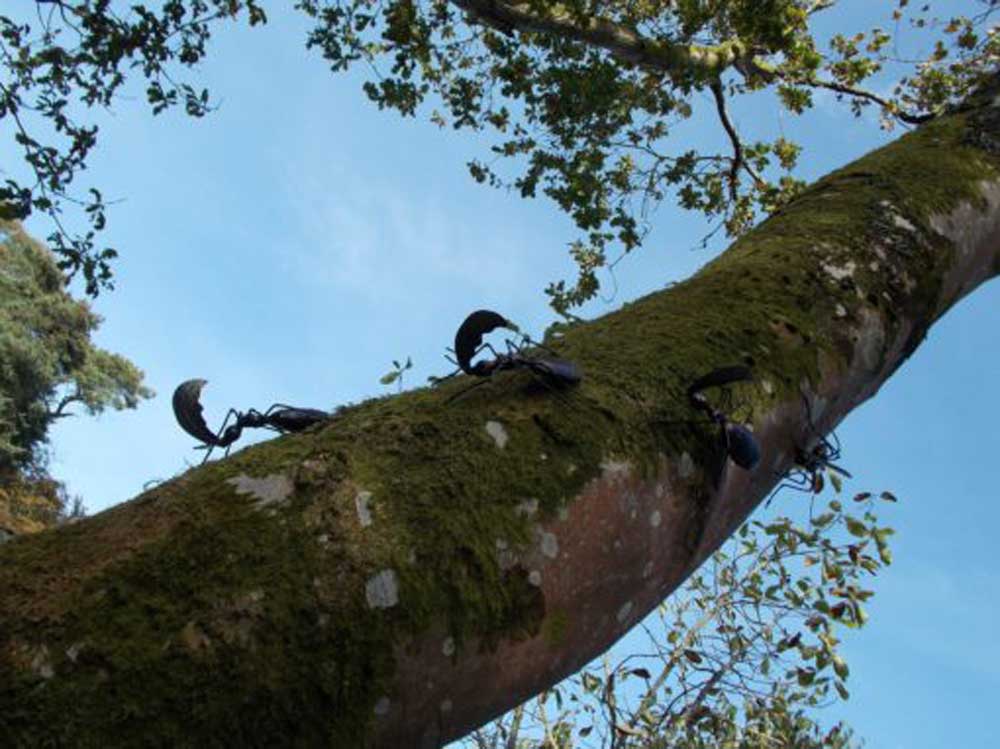 These tiny fellows move in formation whenever they travel. These worker ants were very complicated to make. With three main parts to their bodies similar to the beetle and bee, these guy’s heads were so much smaller than the other sculptures in the series and needed to feature strong jaws to carry their leaves in. In the photographs you can see the size of the ants head in comparison to a small bolt which should give you an idea of just how difficult it was to represent such a complicated creature in a resistant material such as sheet steel. 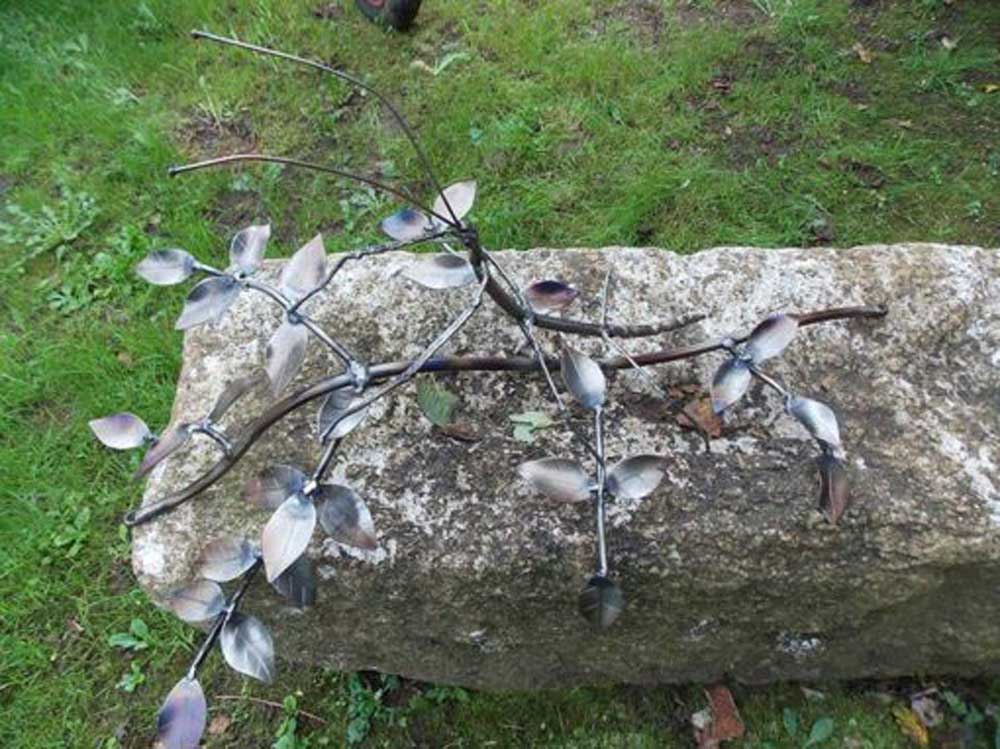 When the gardeners discovered a colony of these enchanting insects in the gardens last year, owner and custodian, Chang Li asked Nigel to add them into his collection of hidden gardener sculptures.  They are the perfect addition, camouflage and disguise are watchwords of this insect’s survival, as they are the favourite meal of many animals, birds, bats and lizards, not to mention frogs and toads.

Giving such a slight and delicate subject character in steel was a challenge. Nigel chose to arch the back of the insect sculpture guiding the stick insect to raise its head inquisitively reaching upwards, carefully feeling its way out of the safety of a bough of leaves. Look very carefully as you approach the garden entrance. He is the very first insect on the trail that you may be able to discover, leading into the magical world of the Hidden Gardeners Nature Trail.

Come and discover the magic of Pinetum Gardens & seek out our 8 ‘Hidden Gardeners’, can you discover them all?